Greece is the home to several acropolises or 'high cities', yet no visit to Greece would be complete without visiting the ancient splendor of the Acropolis of Athens.  This archeological treasure of civilization is still the 'must-see' attraction for all of Greece.

Although less famous than Mycenae or Tirynthe, Athens was a significant center of the Mycenaean civilization, organized around a fortified acropolis that served as a refuge for the population in case of siege and as a residence for the king. In the 13th century BC, the rock was surrounded by an imposing cyclopean wall, still visible behind the southern wall of the Propylaea. The existence of a spring, the Clepsydra, probably explains the choice of this hill. The palace, reached by a staircase, was located on the hill's highest point; it was a place of worship where the goddess of the spring (who later took the name of Athena) and her goddess, King Erechtheus, were venerated.

During the Archaic period, the Acropolis remained a fortress, but it was transformed from a political center into a place of worship. During this period, when the city was being built, the goddess of the spring gave way to Athena, the patron saint worshipped from the beginning of the first millennium in a small temple to the south of the present Erechtheion. The first phase of monumental construction dates from the 6th century. The old temple was completely rebuilt and enlarged around 600, perhaps under Solon, renovated and decorated with marble pediments under Pisistratus. In the 6th century, the hill was covered with votive offerings. The victories of Athens led to the dedication of a new small temple to its patron goddess (Temple of Athena Nike), located at the entrance. Perhaps after the victory of Marathon (490), the decision was made to build the great temple, the "old Parthenon", which the Persian invasion burnt down and devastated in 480.

With a strong personality and surrounded by artists and thinkers of genius, Pericles conceived the grandiose project of redeveloping the Acropolis according to an overall plan, the rebuilt buildings having to impose themselves by their dimensions and their magnificence. To finance this costly project, the annual tribute paid by the allied cities of Athens was used; moreover, in 454, the treasure of this league was transferred from Delos to the Acropolis. Work could therefore begin around 450, with Phidias as the master builder. He commanded a whole host of masons, architects, painters and sculptors. Construction continued without a break, with the Peloponnesian War (431-404 BC) only suspending the work at certain times, without ever stopping it completely.

During the Byzantine years, the Parthenon (also called the Temple of Minerva) became an Orthodox church, in which Saint Sofia (sofia = wisdom) was worshipped instead of Athena, the goddess of wisdom in the past. In 1205 AD, Athens fell to the Christian Romans. The acropolis became a fortress and the Parthenon a Catholic church. In the 15th century, when the Ottoman Turks invaded Greece, the Parthenon was transformed into a mosque. In 1687 Athens was partially destroyed when the Venetians surrounded the city and bombed the Parthenon, which the Turks had filled with explosive powder.

From 1833 to the present day, the acropolis remains in Greek hands, except during the period of Nazi occupation.

Now, the government of Greece, along with financing from the European Union, works to conserve and restore many aspects of the Acropolis and its many sacred buildings, monuments, and statuary. With the restoration project's stated goals, the Acropolis may once again reach the status of 'sacred rock' that it enjoyed for almost two thousand years.

The Doric architectural style is the one most used for the monuments of the acropolis. It is the oldest and most sober style, with a straightforward capital and fairly thick columns (the ratio between the diameter of the base and the height of the column is 1/6), with sharp grooves. The columns have no base. It is considered severe and martial and is often used for imposing monuments like the Parthenon. 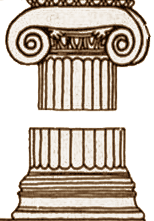 There are also some Ionic architecture examples at the acropolis. The Ionic style is more complex and ornate with coiled rams' horns-like shapes at the top of the columns. The column's shaft is more slender (the proportion between the diameter of the base and the height of the column is 1/9). This style is often found in buildings of small proportions like in the Temple of Athena-Nike and the Erechtheion. But there are also Ionic columns inside the Parthenon. This mixture of styles was a remarkable innovation at the time.

The Propylaea, built between 437 and 432 BCE, is the monumental gateway to the Acropolis. The building consists of the main structure flanked by two wings. Inside the buildings, Doric and Ionic columns divided the spaces. Lavishly painted walls or panels in the north building gave the entire structure its name.

The three main temples on the Acropolis are all built upon previous temples' ruins, all dedicated to the city's patron goddess Athena. This is reflected by inscriptions found in pottery, vases, and statuary from the archaic period that show the cult's early period.

The Temple of Athena

The Temple of Athena Nike, constructed in approximately 420 BCE, is built in the Ionic style. Inside, the temple features an open-air or amphiprostyle with a row of four columns placed in front of each wall. Three walls feature a different frieze of battle scenes, while the east wall depicts a conference of the gods.

The Erechtheion was the essential place of worship of the Acropolis since its origins; intimately linked to the foundation and the durability of the City, it will always remain so. As a result, it is a complex assembly of several sanctuaries; it nevertheless offers a certain architectural unity through the grace of its porticoes and the finesse of its decoration. Its construction was carried out in two stages (421-414 and 409-406). The identity of the architect of this particularly complex building remains unknown. The building, in the Ionic style, more or less reproduces the interior layout of the old temple of the Archaic period, to which two additional elements have been added, the northern portico and the porch of the Maidens (or Porch of the Caryatids), to the south.

Porch of the Maidens

This portico, a major work of Hellenic art, is the most original motif of the Erechtheion and a kind of funerary canopy over the tomb of Caecrops, the Snake King, one of the mythical founders of Athens. Six statues of young girls, perhaps from the workshop of the Athenian sculptor Alcamenes, gracefully perform their supporting function. They are upright, dressed in long Ionian tunics, and wear a circular capital as a headdress. This portico may have served as a tribune from which certain officials could watch the parade and the panathenaic ceremonies while at the same time masking the staircase linking the Erechtheion to the Acropolis terrace.

The most famous building at the Acropolis is the Parthenon. The building itself is designed in the Doric order and constructed almost entirely from Pentelic marble. The building was completed in 438 BCE, and the religious decoration was finished in 432 BCE. Like the other temples in the Acropolis, the Parthenon is dedicated to Athena Parthenos.

The Parthenon is a prime example of the Doric architecture of the Classical period (ca. 480-323 BC). It was Ictinus, a Greek sculptor, not an architect, who said that "artistic achievement is the result of meticulous precision in a multitude of arithmetical proportions". In its whole aspect, there are calculated dosages of parts and rhythmic correspondences. Then from the whole to the parts: the areas of the entablature are divided into logical and harmonious relationships.

The Parthenon suffered severe damage during the 1600s when an explosion occurred inside the temple. Until that time, the Parthenon had withstood time in good condition. In the 19th century, its devastation was complete when Lord Elgin, the English ambassador to Constantinople, stole most of the remaining friezes and other decorations. These items remain on display at the British Museum in England.

The Acropolis is accessible only from the west as cliffs border it in the other three directions. Visitors can either walk, arrive by metro (Acropolis or Monastiraki station) or get a ride to arrive at the base of the Propylaea.

Single tickets to the Acropolis

Combination tickets to the Acropolis

This option costs 30€ year-round and is the most economical one if you want to visit 2 or more of these sites:

The site is usually opened from 8 am to 5 pm every day except on official holidays. The last time of entry is at 4:30 pm.

The site offers an elevator for people with reduced mobility to reach the main upper level of the archeological complex. However, not all parts of the grounds and monuments can easily be accessed if in a wheelchair.

Top 3 wiki contributors for this page:

The Acropolis of Athens has a standard rating score of 9.2 .